Check out why Pogba & Ozil wear the Adidas ACE 16 Series! 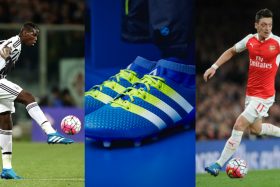 AMG and Khel Now tested the all new Adidas Ace 16.2 version of the Ace series. The 16.2 reflects a serious attempt by Adidas to challenge Nike in the relatively lower tier of football boots. The higher tier Ace 16.1 is lace less while its counter part the 16.2 has laces. These football boots are

On the morning that Barcelona’s Champions League knockout campaign began, adidas rolled out Messi’s first signature colourway of the year. A bright ‘Solar Slime’ design that was worn for the first time against Arsenal at the Emirates. AMG and Khel Now were the first to field test this exclusive piece of footballing heritage out! We rated