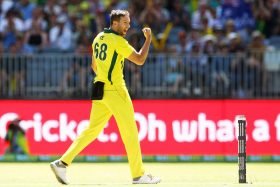 Andrew  Tye becomes the first Australian star to sign with the company and builds on its long-standing record of excellence in this sphere.

Anglian Sports is delighted to announce that we have joined hands with Australian international Andrew  Tye in a unique association that sees the company become the fast bowler’s sole representatives outside Australia.

The 31-year-old thus becomes the first big Australian star to come on board with the company’s revamped talent management programme.

A late bloomer of sorts, AJ played 2nd XI cricket in England with Somerset, Durham and Northamptonshire. Upon returning to Australia AJ started his professional career at age 26, making his debut for Western Australia in the Australian domestic One-Day competition in the 2013-14 season, finishing as the second leading wicket-taker with 13 at an impressive 19.30.

AJ plays in a number of global competitions in the shortest format of the game, including for Gloucestershire in the Natwest T20 Blast.

In the summer of 2018, Tye made his Australian ODI debut in the recently concluded series against England.

His ability to bowl yorker at the death and the dreaded ‘knuckleball’ are seen as two of the key attributes that make him a sought-after commodity in the coloured clothing.

Given an opportunity by the Sydney Thunder to play in the Big Bash League in the same year, AJ starred in the shortest format, switching to the Perth Scorchers the following season. There, he was an integral part of the team’s second successive triumph in BBL 04. He was seen as a breakout player in the event, with then Australian T20 captain Aaron Finch labelling him as the ‘find of the tournament.’

The pacer’s rise continued in early 2016 with him making his debut for Australia in the T20 format against India in January as well as being selected for T20 World Cup Team later that same year.

In the summer of 2018, Tye made his Australian ODI debut in the recently-concluded series against England.

His ability to bowl yorkers at the death and the dreaded ‘knuckle ball’ are seen as two of the key attributes that make him a sought-after commodity in the coloured clothing.

His skills that enable him to control the flow of runs in arguably the toughest phase of the game, the slog overs, have made the go-to man for captains in this vital period, deservedly earning him the reputation as the best death overs bowler in the world.

As far as Tye’s exploits in India are concerned, he first signed for Indian Premier League (IPL) side Chennai Super Kings in 2015 on the back of a string of impressive performances for the Scorchers. More recently, he also featured for Gujarat Lions in the competition’s previous edition.

In April 2017, Tye became the first bowler to take a hat-trick on IPL debut. Representing Gujarat against Rising Pune Supergiant, he picked up five wickets, helping his side register their first win of the season.

Interestingly, this latest three-peat was sandwiched between two other hat-tricks for Perth, first against the Brisbane Heat in the 2016-17 campaign and the other against the Sydney Sixers in the 2017-18 season. That saw the pacer become the only bowler to bag three T20 hat-tricks in the same calendar year.

Following his triple against the Sixers earlier this season, Andrew also became only the third bowler to take two hat-tricks for the same T20 team. His three hat-tricks also place him joint top of the pile in the list of bowlers with most T20 hat-tricks.

With a pedigreed resume like that, it was little surprise when Tye was a wanted man at the IPL 2018 Auction in January, where, after some intense bidding between the Super Kings and a revamped Kings XI Punjab he went to the northern outfit in a whopping $1.4 million (₹ 7.2 crores) deal. Remarkably, on the same day, the fast bowler also sealed his first 5-wicket haul in ODIs against England in front of his home fans in Perth.

Tye is also expected to play a vital part for his country over the next couple of years in both limited-overs formats in the lead up to next year’s ICC Cricket World Cup in England and Wales as well as the T20 World Cup in 2020 in his native Australia.

Speaking on his new association with Anglian Sports AJ Tye said, “I’m delighted to be joining hands with a company like Anglian Sports, who boast such a solid global reputation across many diverse fields. They are particularly passionate about sports and I’m convinced that they possess not only the enthusiasm but also the cutting edge expertise to accompany me through what is set to be a challenging journey in international sport, in a highly competitive environment. I am excited about our future together.”

Reflecting on his upcoming stint with KXIP the pacer said, “I have played before for Chennai and Gujarat. I love coming to India and playing in front of the amazing fans. I am happy to be turning out for Kings XI Punjab this time around. The IPL is a tough and competitive league, but we have a great squad and will be looking to play some good cricket.”

He further added, “Alongside the Big Bash, the IPL is one most popular leagues in the world and has been a launching for many great young players. Having played here before will definitely help and I’m keen to draw on that experience this season, for the benefit of myself and the team.”

Speaking about Tye’s acquisition, Siddharth Deshmukh, Head, Talent and Sponsorship at Anglian Sports said, “We are delighted to have had the opportunity to bring Andrew on board. He’s scaled great heights in a short span of time and still has a lot to achieve in the game. We are excited to be joining him on this journey.”

Asked why the company chose to associate with the Australian he explained, “If you look at AJ’s career so far he has been with Western Australia since 2013, part of the Scorchers since 2014, with Gloucester since 2016 and now he has signed with KXIP for at least the next three years. Thus, his graph clearly shows a commitment to associations that are not only financially rewarding but also ambitious over a period of time. In today’s market when most players are transitioning from season-to-season, this commitment is hard to find and it’s something that we value deeply. Therefore, this was a natural fit and I am confident that we will have a long and fruitful partnership.”